The Ayinger Brewery is a brewery in Aving, Bavaria, Germany, about 25 km from Munich.

Up until the Second World War, dark beer was the predominant beer type in the Munich area.

The hard water found in the region played a special role in producing this specialty.

In his book “Beer International”, the world-renowned English beer writer, Michael Jackson, accurately describes the Ayinger “Altbairisch Dunkel” as: “A good example of its kind. Impenetrably dark with a golden-brown gleam when held up to the light, and with a warm aroma and malty taste, while summoning up coffee taste sensations on going down.

It is brewed from five types of malt (two of which are torrified dark), and it is only lightly hopped.” It is produced using the traditional double fermentation process. 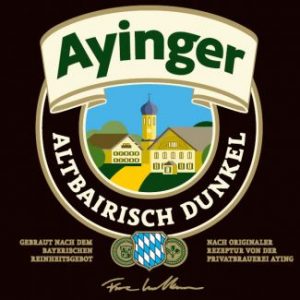