The Brew Foundation is a father and son team obsessed with creating the most drinkable beers on the planet.

What started as an idea (after many years researching) soon became a reality when the opportunity to cuckoo brew out of a great existing micro brewery in Wincle.

We’ve only gone and dropped the C-Bomb!

This single hopped session IPA is made from a simple pale ale malt base and loads and loads of Citra hops added in the last 20 minutes of the boil.

It’s then cooled and hop bombed with even more Citra to make a relatively low bitterness beer with lots of tropical fruit flavour and aroma. 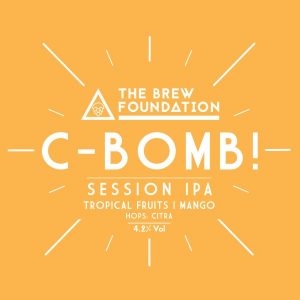