Corsendonk refers to the Priory of Corsendonk in Oud-Turnhout which was in operation from 1398 to 1784, and was rebuilt in 1968 as a hotel complex by new owners Corsendonk Hotels.[

In 1982, on the 125th anniversary of the Oud-Turnhout municipality, Jef Keersmaekers, grandson of Antonius Keersmaekers who had founded a brewery in 1906, was approached by the local tourist office to use the Corsendonk name for its abbey association.

As the family brewery had closed down in 1953, the beers were contracted out to other breweries, including Brasserie Du Bocq who now brew all the brands.

A spicy edge reveals the effect of the yeast, and a bitter note completes proceedings. 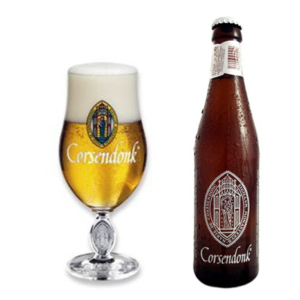