When William of Orange prohibited the importing of alcohol to England in the early Eighteenth Century, so began the production and consumption of (domestic) English gin by huge numbers of distillers, the majority being of dubious quality.

Its popularity was such, especially amongst the poor, that gin was distilled and sold in one fifth of all London homes. This excessive and uncontrolled consumption provoked a rapid degradation of society, a period given the name the Gin Craze.

In trying to curb this ‘social evil’, the 1736 Gin Act was introduced during the reign of George II, whereby an annual levy of £50 was imposed on those wishing to produce and sell gin.

After six years, just two distilleries had agreed to pay this tax.

Fifty Pounds Gin is produced in a small and legendary distillery located in the south-east of London, with a tradition of more than two centuries behind it.

The method is carried out in a still manufactured by the legendary John Dore & Co Limited, in which a perfectly balanced, secret combination of herbs, spices, fruits and flowers, together with grain spirit (a neutral alcohol, previously distilled four times to achieve a greater purity) is distilled.

Some of the botanicals are juniper berries, coriander seeds, grains of paradise, savory, orange and lemon peel, liquorice and angelica root. 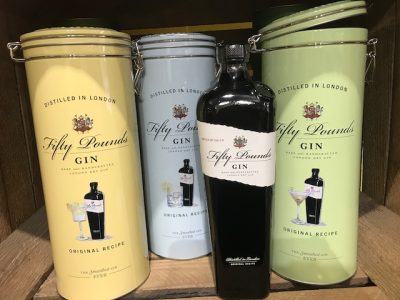