St. Bernardus is a brewery in Watou, Belgium and was founded in 1946.

St.Bernardus Tokyo Sounds familiar? You are quite right, because in 2012 we launched a one-off brew on the occasion of the opening of the first St.Bernardus-themed café in the Japanese capital.

Eight years later, you can sample our St.Bernardus Tokyo again, albeit with a new recipe!

The young Belgian illustrator Jonas Devacht created the artwork for the can, which consists of an impression of Japanese nightlife in the iconic streets of Kanda district, where you can find ‘Brasserie St.Bernardus’.

St.Bernardus Tokyo is an unfiltered ale, which has been brewed with a large amount of wheat, holding the middle between a white beer and a saison.

St.Bernardus Tokyo is famed for its hints of citrus, combined with likeable florals of chamomile and fruity yeast aromas of banana and red apple.

Attentive beer fans may also detect a hint of clove and vanilla, as well as the typical esters of our unique St.Bernardus yeast.

A refreshing beer with a spicy aroma and a slight hint of bitterness and sourness on the back of the palate!

A real treat for the more adventurous beer fan. 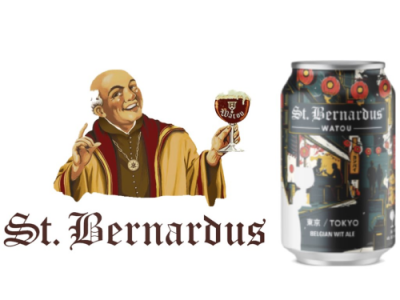